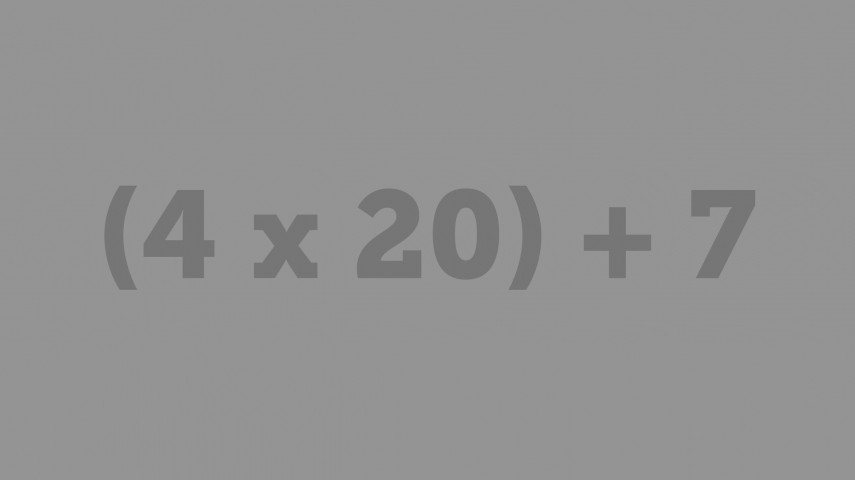 Since the beginning of the year, we at Wallrich Landi have been running a series of ads poking fun at our own industry’s proclivity for jargon. Each concludes with the slogan, “Because marketing communication actually has to say something.”

One key to “saying something” is trying not to say too much. Most clients inevitably, understandably, have much to say. We typically respond (with apologies to Thoreau), “Simplify, simplify, simplify.” Well, the other day, I heard a story* that so neatly made the “less is more” argument I had to share it here. The story was about the Gettysburg Address.

Here’s what most people already know about the Gettysburg Address:

Allow me to fill in some of the rest, and explain why it deserves mention here.

Back in Lincoln’s day, long before the advent of the digital sound bite, public speaking was an endurance sport. Speeches and debates wore on for hours. That may be partly because in the Victorian Era, the language of discourse was so spectacularly baroque that it took twice as long to utter a single thought. As a politician, Lincoln knew how to “talk pretty,” but what he really wanted to do was to break from that tradition and speak in a way that would connect better with the common man. It was a style he assiduously crafted over the years, and the address he delivered at the dedication of the Soldiers’ National Cemetery in Gettysburg was his crowning achievement. It remains a marvel of succinct eloquence.

One thing most people don’t know about that day is that Lincoln was not the only speaker. He was preceded by Edward Everett, one of the nation’s most famous orators. Everett, who spoke for about two hours, absolutely epitomized the era’s florid linguistic style. To give you an idea, here’s his opening sentence:

STANDING beneath this serene sky, overlooking these broad fields now reposing from the labors of the waning year, the mighty Alleghenies dimly towering before us, the graves of our brethren beneath our feet, it is with hesitation that I raise my poor voice to break the eloquent silence of God and Nature.

Can you imagine two hours of that? Then it was Lincoln’s turn. He spoke for about two minutes. When he was done, the crowd was stunned, silent. The truth is, the speech wasn’t really intended for them. Lincoln knew this speech would be reprinted throughout the nation. He wanted it to get right to the point—and to do so powerfully—without the baggage of curlicue metaphors and arcane historical references.

And reprinted it was, including, eventually, as an engraving on the south wall of the Lincoln Memorial. All three paragraphs, all ten sentences of it. If you’ve never read it in its entirety, or if it’s just been a while, I invite you to take a moment to read it here. As Independence Day approaches, it seems like a fitting time to do so.

Four score and seven years ago our fathers brought forth on this continent a new nation, conceived in liberty, and dedicated to the proposition that all men are created equal.

Now we are engaged in a great civil war, testing whether that nation, or any nation, so conceived and so dedicated, can long endure. We are met on a great battle-field of that war. We have come to dedicate a portion of that field, as a final resting place for those who here gave their lives that that nation might live. It is altogether fitting and proper that we should do this.

But, in a larger sense, we can not dedicate, we can not consecrate, we can not hallow this ground. The brave men, living and dead, who struggled here, have consecrated it, far above our poor power to add or detract. The world will little note, nor long remember what we say here, but it can never forget what they did here. It is for us the living, rather, to be dedicated here to the unfinished work which they who fought here have thus far so nobly advanced. It is rather for us to be here dedicated to the great task remaining before us—that from these honored dead we take increased devotion to that cause for which they gave the last full measure of devotion—that we here highly resolve that these dead shall not have died in vain—that this nation, under God, shall have a new birth of freedom—and that government of the people, by the people, for the people, shall not perish from the earth.

*That story I heard about the Gettysburg Address was episode #12 of the podcast Lexicon Valley, which I cannot recommend more highly to anyone interested in the English language.